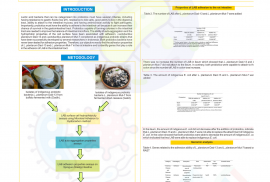 Adhesion capacity has been considered as one of the selection criteria for probiotic strains. The aim of the study was to determine the adhesion properties of two candidate probiotics, Lactobacillus plantarum Dad-13 and Lactobacillus plantarum Mut-7. The evaluation included hydrophobicity of the cell surface, autoaggregation, and adhesion of L. plantarum Dad-13 and L. plantarum Mut-7 to the intestinal mucosa accompanied by genomic analysis. All strains tested showed high surface hydrophobicity and medium autoaggregation ability. Exposure of both isolates to the surface of the rat intestine increased the total number of lactic acid bacteria, indicated the attachment of lactic acid bacteria on the surface of the rat intestine and reduced the indigenous E. coli. Both strains have genes related to adhesion properties that could play an important role in increasing the adherence of probiotics to the intestinal mucosa. Based on this findings, L. plantarum Dad-13 and L. plantarum Mut-7 have the ability to attach to the intestinal mucosa in the rat intestine model system. read more 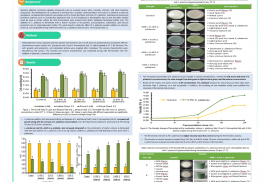 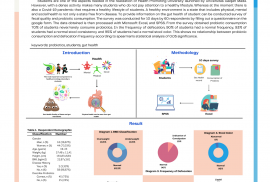 Students are one of the aspects needed in the realization of Health Promoting University launched by Gadjah Mada University. However, with a dense activity makes many students who do not pay attention to a healthy lifestyle. Whereas at the moment there is also a Covid 19 pandemic that requires a healthy lifestyle of students. A healthy environment is a state that includes physical, mental and social health is not only a state free from disease. To provide information on the gut health of student can be conducted survey of fecal quality and probiotic consumption. The survey was conducted for 10 days by 60 respondents by filling out a questionnaire on the google form. The data obtained is then processed with Microsoft Excel, and SPSS. From the survey obtained probiotic consumption 70% of students never/rarely consume probiotics. In the frequency of defecation, 90% of students had a normal frequency, 93% of students had a normal stool consistency and 95% of students had a normal stool color. This shows no relationship between probiotic consumption and defecation frequency according to spearman’s statistical analysis of 0.05 significance. read more 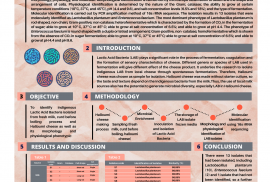 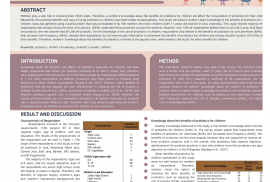 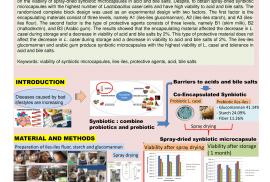 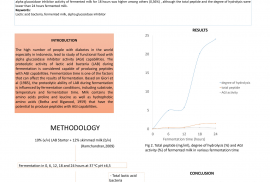 The high number of people with diabetes in the world especially in Indonesia, lead to study of functional food with alpha glucosidase inhibitor activity (AGI) capabilities. The proteolytic activity of lactic acid bacteria (LAB) during fermentation is considered capable of producing peptides with AGI capabilities. Fermentation time is one of the factors that can affect the results of fermentation. In this study, AGI was studied in skimmed milk fermentation using Lactobacillus plantarum DAD13 with fermentation times of 0, 6, 12, 18 and 24 hours. Apart from AGI, the number of bacteria, pH, total peptides and degree of hydrolysis were also studied. Protein pattern showed that the majority of molecular weight of fermented milk was between 10-34 kDa, which was suitable for AGI. The results showed that the alpha glucosidase inhibitor activity of fermented milk for 18 hours was higher among others (0,36%) , although the total peptide and the degree of hydrolysis were lower than 24 hours fermented milk. read more 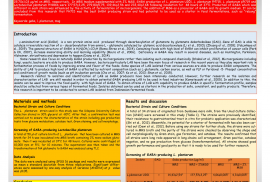 γ-aminobutiric acid (GABA)  is a non-protein amino acid, with various effects of functional health, produced from decarboxylation of glutamate catalyzed by glutamate decarboxilase (GAD). This enzyme is produced by various microbes like lactic acid bacteria (LAB) as starters to increase the concentration of GABA in fermented foods.  Screening was conducted on 34 strains of LABs (30 Lactobacillus rhamnosus and 4 Lactobacillus plantarum) previously isolated from fermented foods. These LAB strains were grown on MRS broth and GABA production was detected using TLC methodology. Strains produced positive GABA spots were confirmed from GAD existence. The results of this study showed that 21 out of 34 strains tested (17 L. rhamnosus and 4 strain L. plantarum) demonstrated their potential as GABA producers.  L. plantarum U201, L. plantarum PH715, L. plantarum PH719 and L. plantarum PH18bb, produced GABA with concentrations of 14,43±2,54 µg/ml, 31,30±4,11 µg/ml, 28,57±4,14 µg/ml, dan 25,70±1,03 µg/ml on MRS, respectively.  In MRS medium supplemented with 2% MSG, GABA production of L. plantarum U201, L. plantarum PH715, L. plantarum pH719 and Lactobacillus plantarum PH18bb were 177,57±3,25, 279,80±5,75, 139,46±2,56 and 233,40±2,68 following incubation for  48 hours at 370C. Production of GABA which was different in each strain was influenced by the activity of fermentation of microorganisms, the addition of MSG as a precursor of GABA and its growth medium. It can be concluded from this research that PH715 was the best GABA producing strain and had potential to be used as a starter in food fermentations, such as “rebung” fermentation. read more 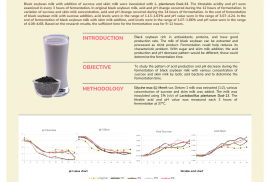 Effect of Sucrose and Skim Milk Addition on the Acid Production during black soybean milk fermentation by L. plantarum Dad-13 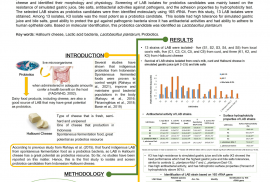 This study aimed to isolate lactic acid bacteria (LAB) from Halloumi cheese produced by Mazaarat Artisan Cheese Indonesia, to evaluate their potential as a probiotics, and to identify them based on molecular characteristics. LAB were isolated from fresh milk, curd, and Halloumi cheese and identified their morphology and physiology. Screening of LAB isolates for probiotics candidates was mainly based on the resistance of simulated gastric juice, bile salts, antibacterial activities against pathogens, and the adhesion properties by hydrophobicity test. The selected LAB strains as probiotics candidates were then identified molecularly using 16S rRNA. From this study, 13 LAB isolates were obtained. Among 13 isolates, K3 isolate was the most potent as a probiotics candidate.  This isolate had high tolerance for simulated gastric juice and bile salts, good ability to protect the gut against pathogenic bacteria since it has antibacterial activities and had ability to adhere to human epithelial cells. Based on molecular identification, this probiotics candidate was identified as Lactobacillus plantarum. read more